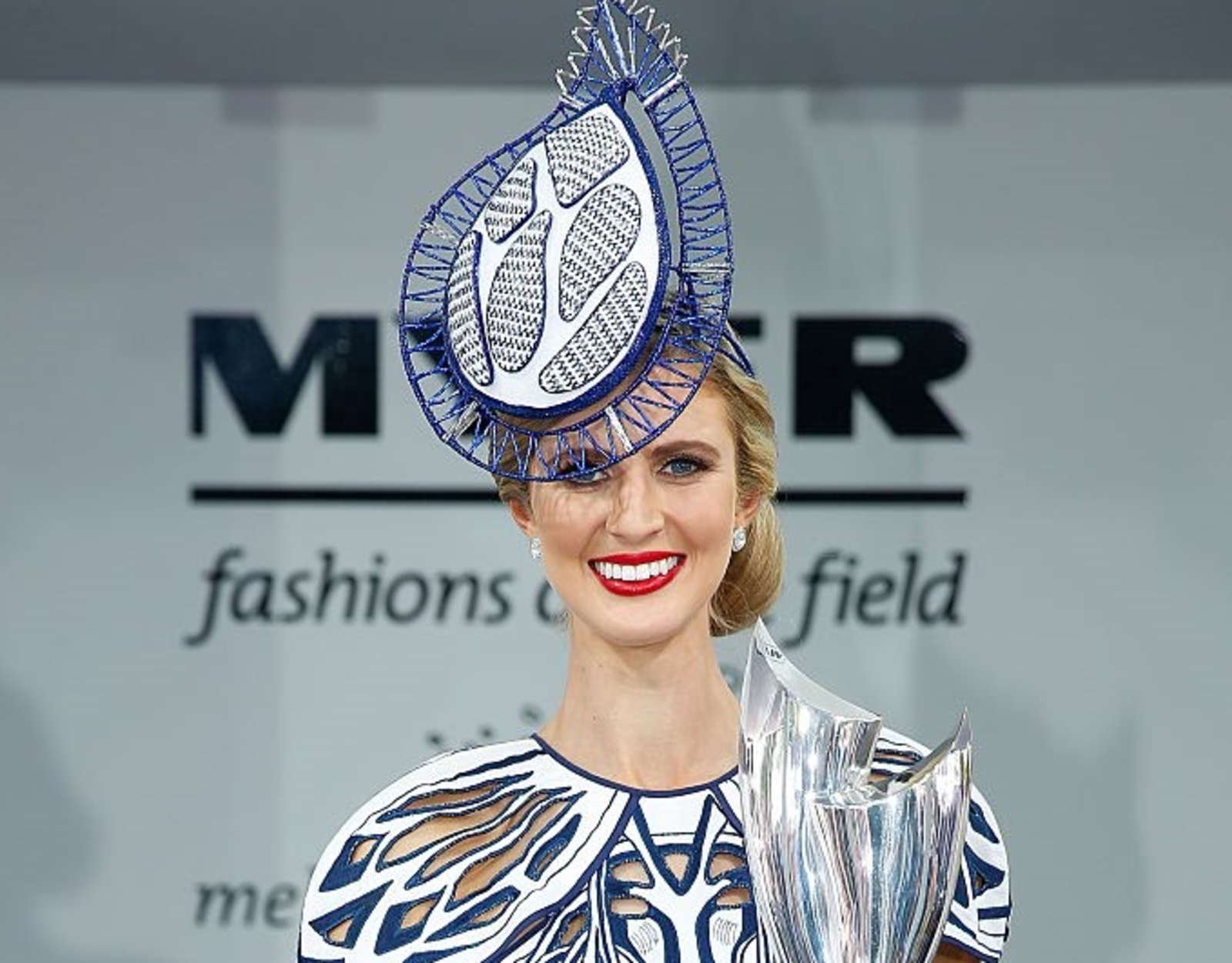 There's no more presitigous Fashions on the Field competition in Australia than the national final at Flemington Racecourse during the Melbourne Cup Carnival, and the calibre of entrants this year was better than ever. The competition was taken out by none other than Courtney Moore, who was representing our great state at the national final after winning the heat at Adelaide Cup Day 2016 at Morphettville Racecourse.

Courtney is not just a seasoned FOTF pro, but a true lover of The Races, with her whole family getting involved in racing events around the country from Adelaide to Geelng and everywhere in between. We spoke to Courtney Moore after her recent win to find out a little bit more about the racewear icon!

Congratulations on winning the national Fashions on the Field! 3 words to describe how you felt when you won?

Thank you so much!! It still feels so surreal! 3 words on how I felt… Firstly I didn’t believe it but I was so humble, grateful and thrilled!

You were up against some beautifully dressed entrants – did you have any favourites?

Every competitor on that stage in the National Finals were a stand out in there own individual way (even though we were mostly in navy haha) but I got to know all of the girls on a personal level, and I could not have asked for a better bunch of girls to spend 10 days with during the Melbourne Cup Carnival. Ladies in each state were wearing something close to their heart. Alice was wearing a dress made by herself (so talented), Reggie was wearing a skirt made by her close friend, Inessa was wearing an amazing combination that resembled her state of QLD and Ashleigh was wearing a WA designer headpiece and outfit. Can I say everyone was my favourite?! 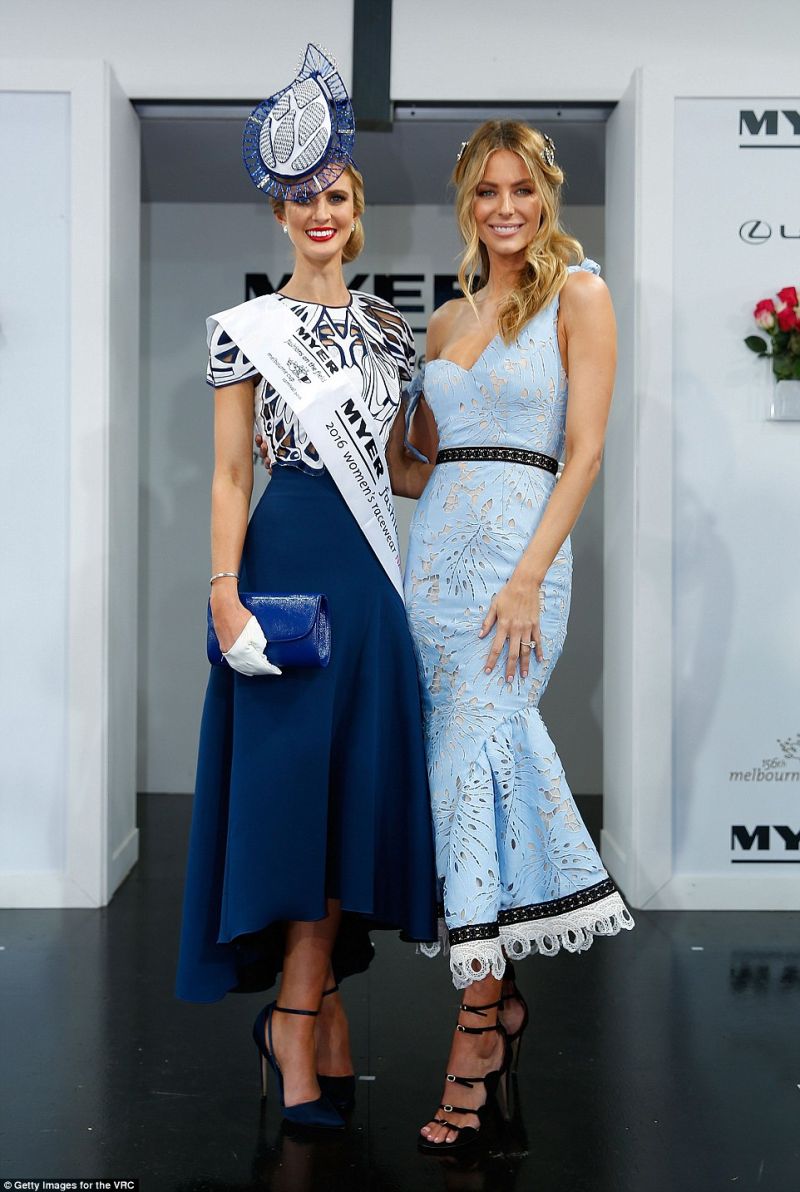 Who was your winning outfit by?

My winning outfit was a skirt and top combination. The top was from Alice McCall and the skirt was an Ellery mullet type skirt that was longer at the back. I got the skirt adjusted to fit around my waist and attached the top to the skirt. A lot of people thought it was a dress! My navy shoes were from ASOS with a handbag from Myer.

But the winning part of the outfit I must say was my 3D headpiece that was all hand beaded and hand wired by my very talented mother Irene Moore from Moore Millinery Designs. It matched the outfit so well.

It’s the most incredible FOTF prize pool in Australia; which prize were you most excited about receiving?

I cannot believe the amount of prizes I won, I was completely overwhelmed. Winning the Lexus is obviously an amazing prize to win, and I cannot wait to pick it up and drive it, but the prize I was most excited about was winning the title of the 2016 National Winner for Fashions on the Field! 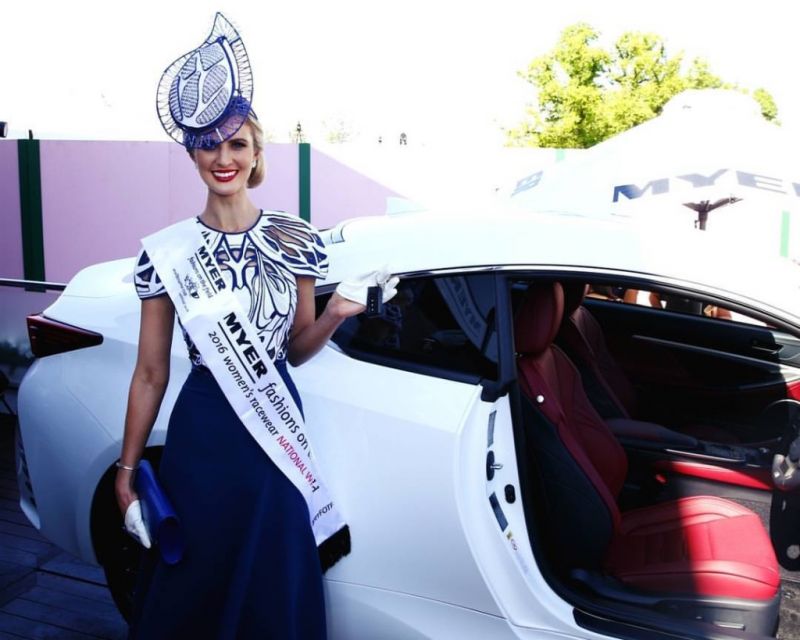 You first entered at the Adelaide Cup Fashions on the Field event this year – what preparations did you make in between that win and winning at Flemington?

I won Adelaide Cup this year in March, so therefore I was the SA representative at the National Finals on Oaks Day. There was a long gap between winning and the Melbourne Cup so there was plenty of time to organize things. However firstly, I just graduated from studying my Masters in Prosthetics and Orthotics and I was in Adelaide on an 8-week placement from Sep-Nov so therefore I had to organize through the university time off for that week. I was unsure if I could get time off however it worked out, although I had to fly back during the 10 days I was in Melbourne to continue my placement, so it was a very busy week!

Whilst in Adelaide on placement, Mum and I would FaceTime to draw headpieces and to show the progress to make sure it was what I wanted (I am a little particular in my designs and choices).

When did you first start entering Fashions on the Field events?

My very first FOTF entry was at the Geelong Cup in 2013 and I made top 10… However I have come a long way since then!

What are some of your favourite pieces you’ve worn at FOTF events?

I have had a lot of amazing pieces I have worn to FOTF events, and I always wear what I love. However, I must say Derby Day 2015 is one of my favourites! I designed my dress that was a laser cut material with one sleeve and a boater made out of the same material. I actually won the Longines award “Miss Elegance” on Derby Day as well as winning the “Women’s Racewear” title.

Another favourite piece is what I wore to the Adelaide Cup in 2015. It was another dress designed by me with lace sourced from Queensland and a headpiece made from the same lace.

One more favourite was my 1950’s inspired dress made for the Caulfield Cup in 2015. Mum and I sourced the vintage material from Frankie Stuarts in Melbourne and I designed the dress and headpiece also to match.

I design my dresses that I want made and the headpieces to match and then I get talented women to bring my designs to life. Lynda Mogg makes my dresses from Beautiful Bridalwear in Melbourne and all my millinery that I wear is made my mum Irene Moore.

(pictured - some of Courtney's other beautiful race day outfits) 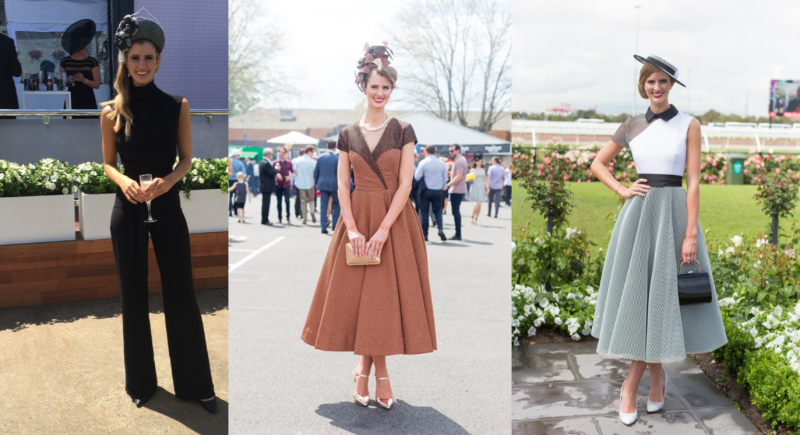 What do you love most about a day at The Races?

A day at the races is full of fun and laughter. I love catching up with friends and having a glass of bubbles as well as enjoying the fashion around the racecourse! The day is always full or energy and no matter the weather, every race is enjoyable!

A day at the races is also a family affair for my family. We love going to the races together and enjoying the day! My twin sister Andrea and I have attended nearly every race day together as well and my Mum and Dad (also our bag holder for the day hehe!) and my partner Robbie. My 2 older sisters live interstate, Shandell being in Adelaide and Bronwyn in Darwin, however the distance does not matter because we always keep each other updated with races we attended, either it being in Geelong, Melbourne, Adelaide or Darwin!

What other South Australian events do you love to attend?

I love attending the Fringe Festival in the summer, it’s the best time of the year in Adelaide I think! The city is just full of creativity and there’s so much buzz! There’s plenty of shows to see plus the weather that time of the year is beautiful!

I also love going the Adelaide Cup, it has been a family tradition for 4 years now as well as the wineries. My favourite wineries are in the McLaren Vale region and I rode the Shiraz trail this year in Willunga to a few different wineries!

You have the chance to follow in Courtney's footsteps and enter the national Fashions on the Field competition at Morphettville Racecourse on Adelaide Cup Day 2017. Stay tuned on their Facebook page and also follow Myer for more information about the competition.

All images courtesty of Courtney Moore